Daps aims to be more than just a social media manager. With one simple connection you can track where you met that person, your mutual friends, and keep in contact in one convenient place.

While originally tasked with fixing a broken app, we identified a bigger problem: the App Store is filled with social apps that employ a similar concept in being a social media account manager. Our challenge was to travel in a different direction for both the branding and the feature list to create an app that stands out as an attractive alternative in the social app landscape.

As a team, we decided a complete rebuild would prove to be more effective to ensure the app followed our own coding standards and would also include a sleek new brand identity and app views. We pivoted the brand and app design to embrace a cleaner, playful look that would be relevant and resilient for the future but done so in an affordable way.

building blocks of a brand

We designed a unique, infectious brand identity that audiences are attracted to and users enjoy. The brand is bold, dynamic, and versatile across all visual touchpoints. Utilizing a vibrant color palette, the logotype effectively applies bubbly-esque elements without following clichéd conventions. The rest of the design system followed suit with a lot of creative energy in illustrations and an offbeat verbal language. 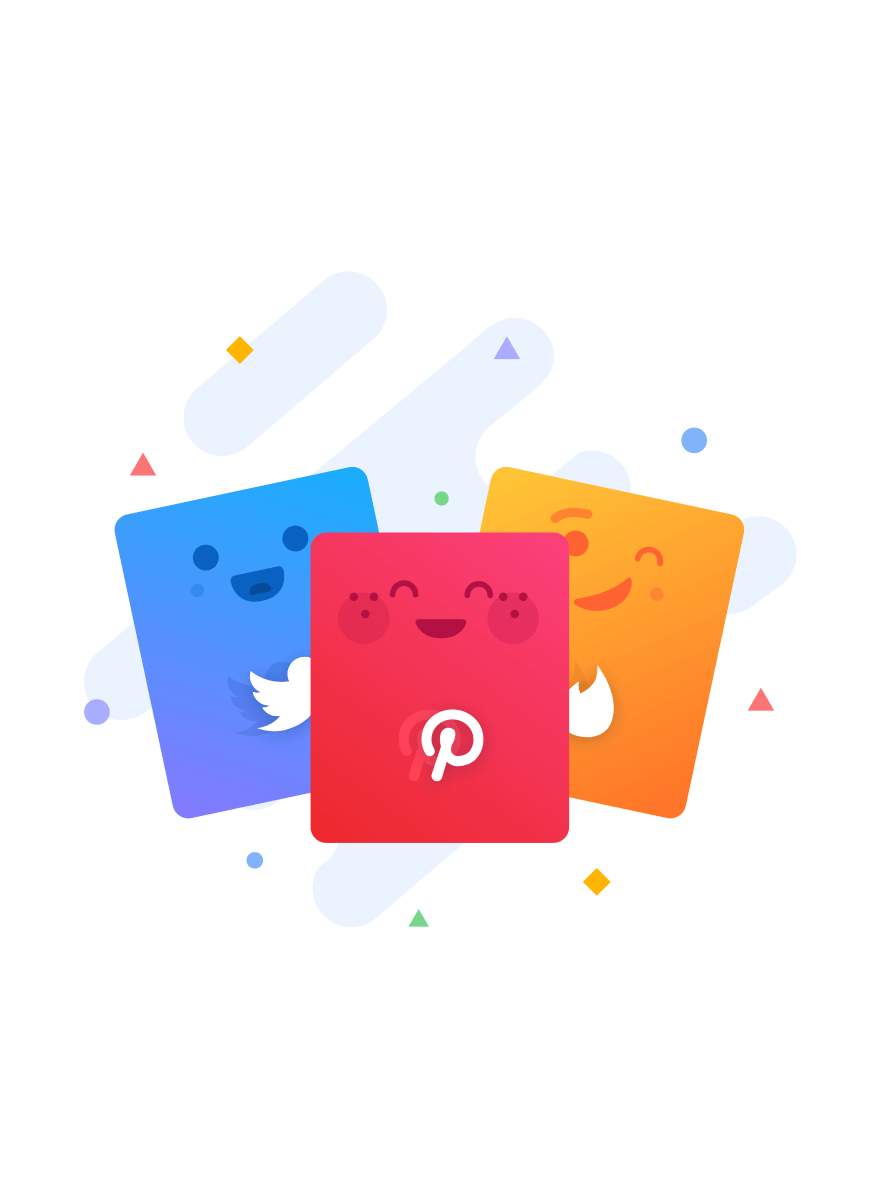 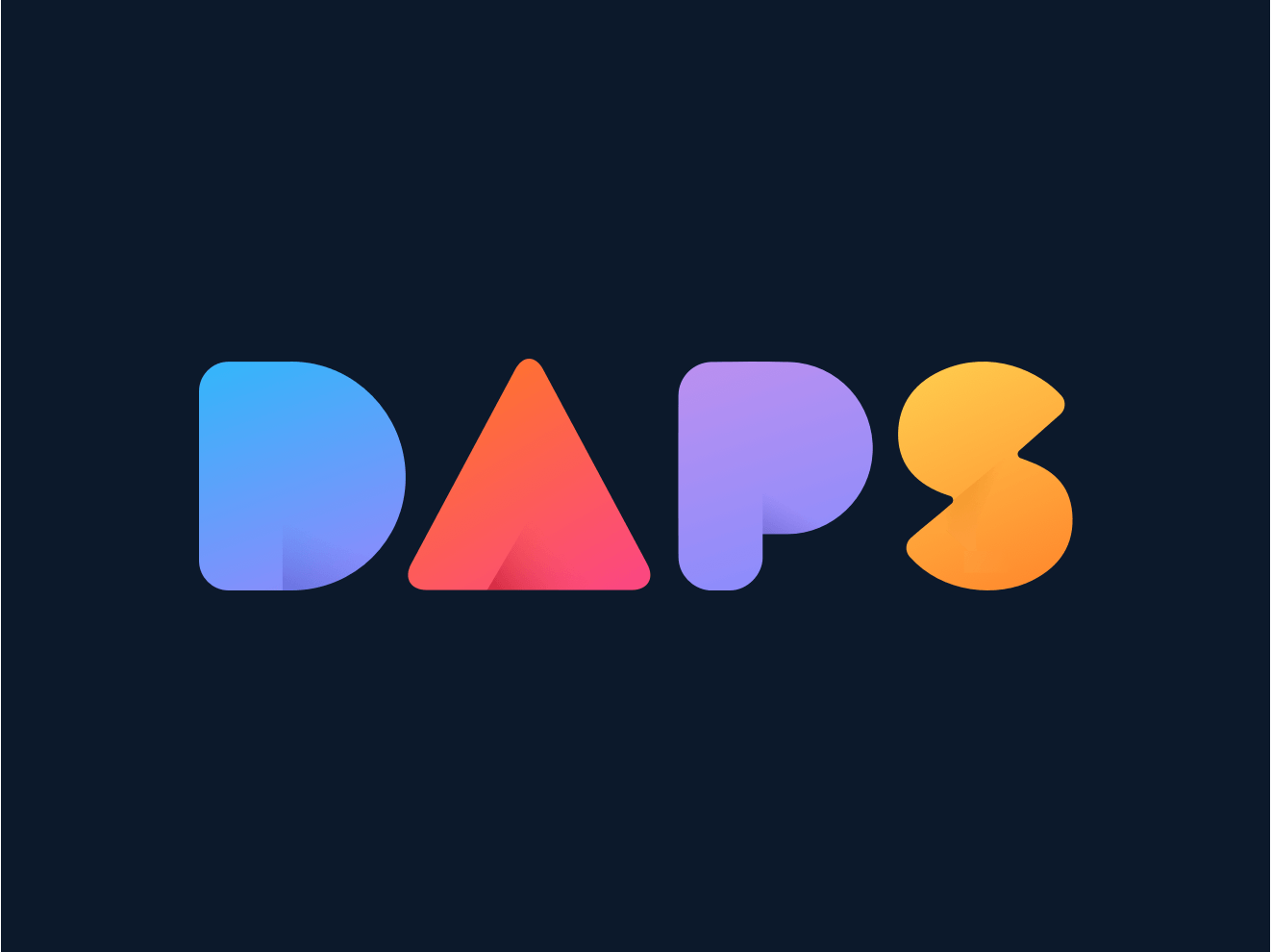 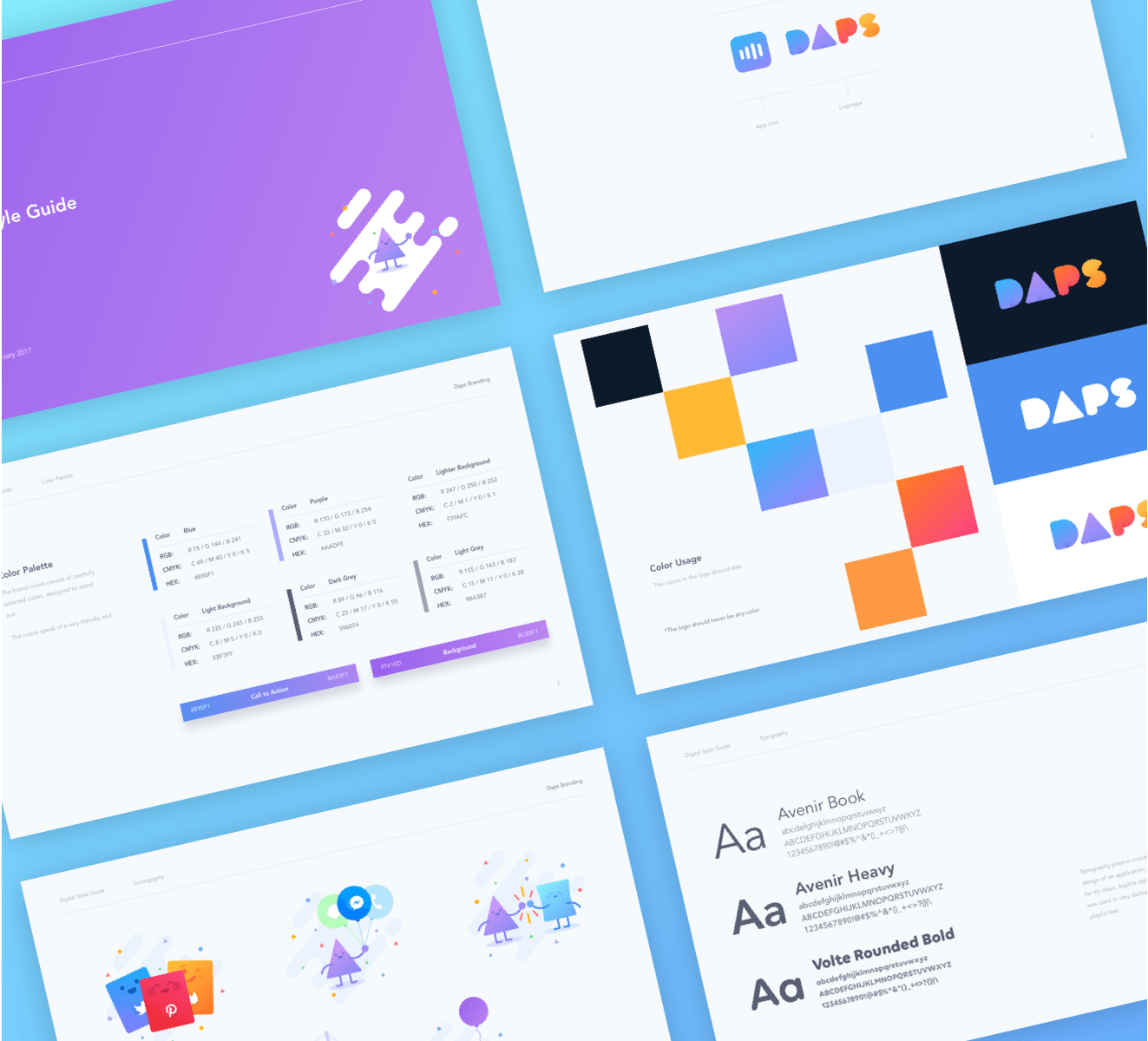 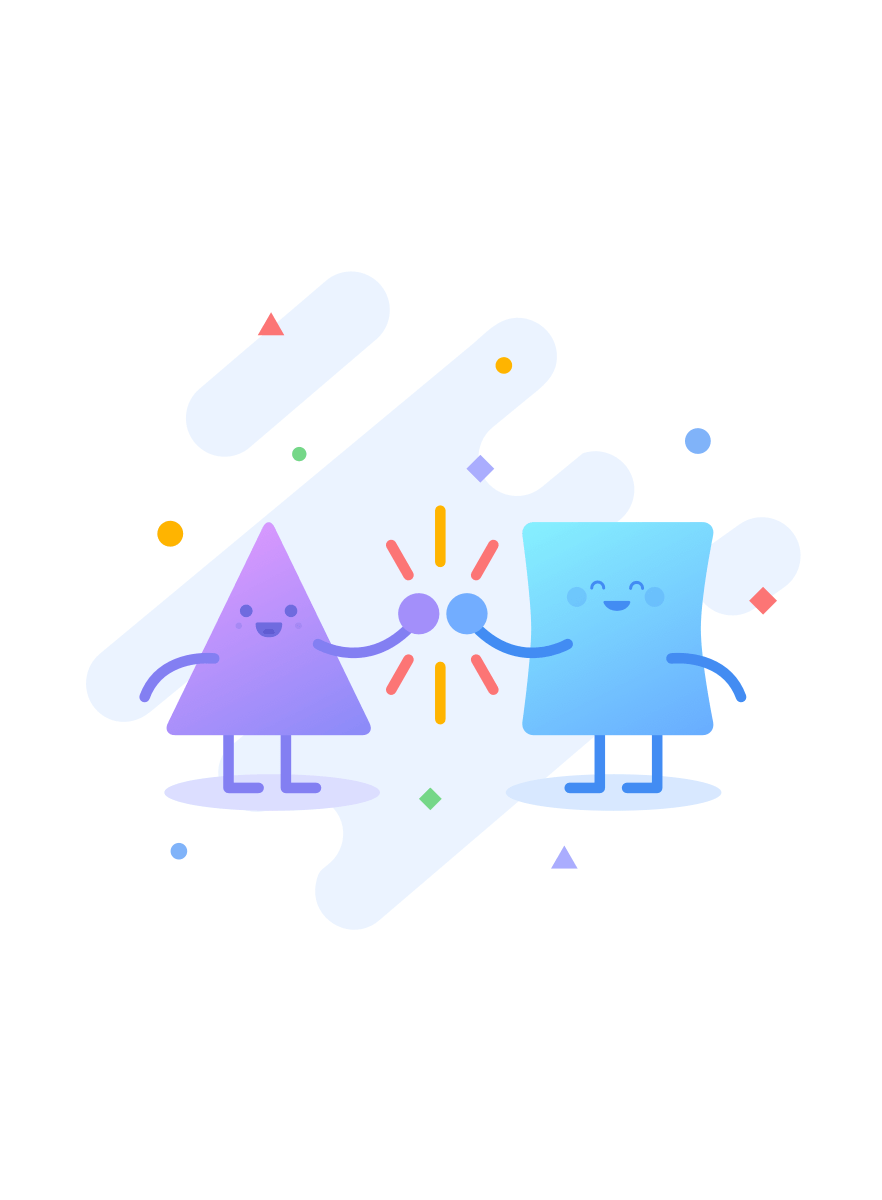 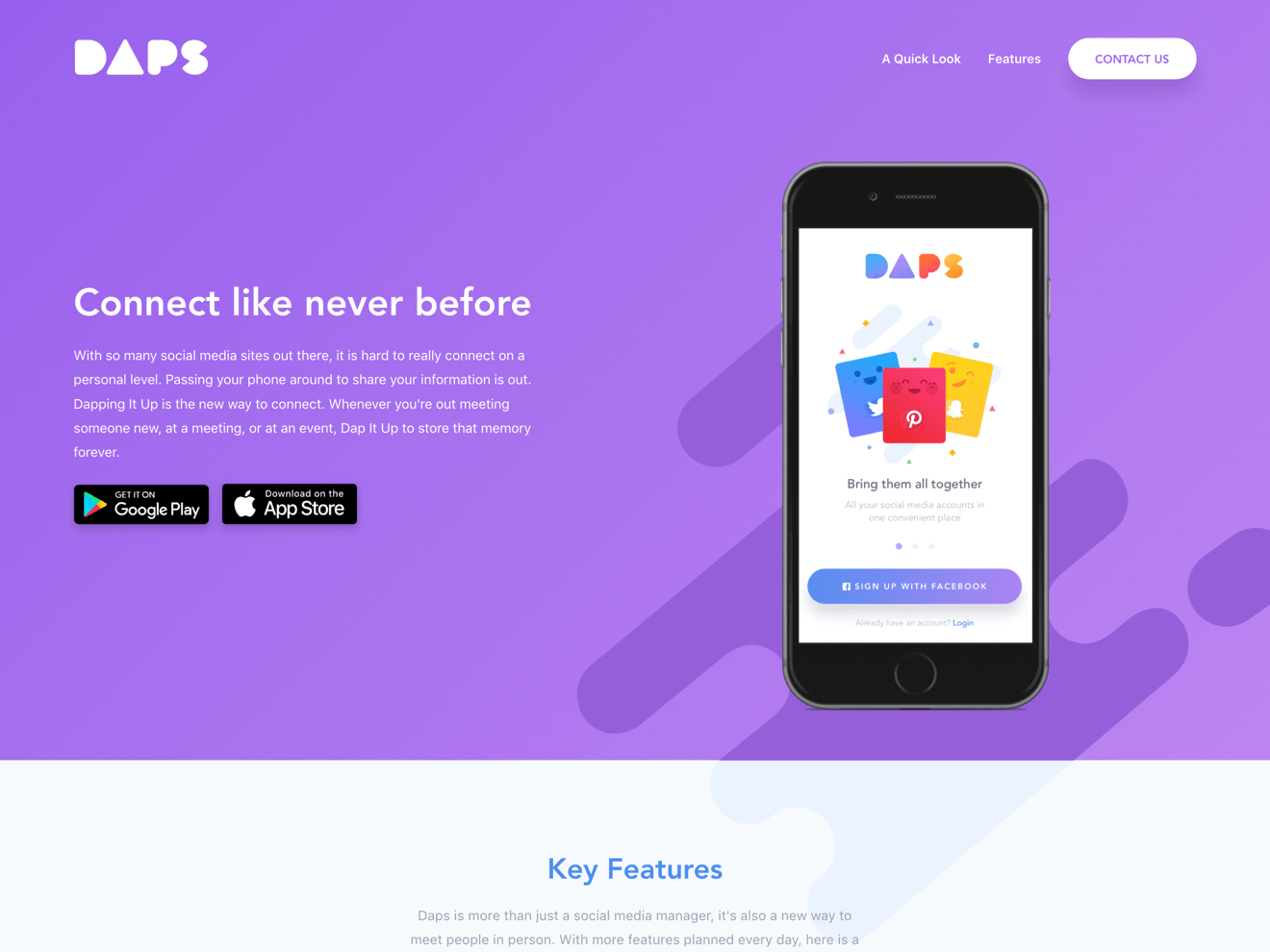 building an app to stand out

bringing it to life

With a lot of the app’s functionality and concepting in place, we began bringing the app to life. The app informed the brand as much as the brand informed the app as we decided to carry the infectious brand into a strong and witty app design. We kept the UI relatively simple with fun punches of color and on-brand characters. The result is a fun social experience that allows users to better track their connections. 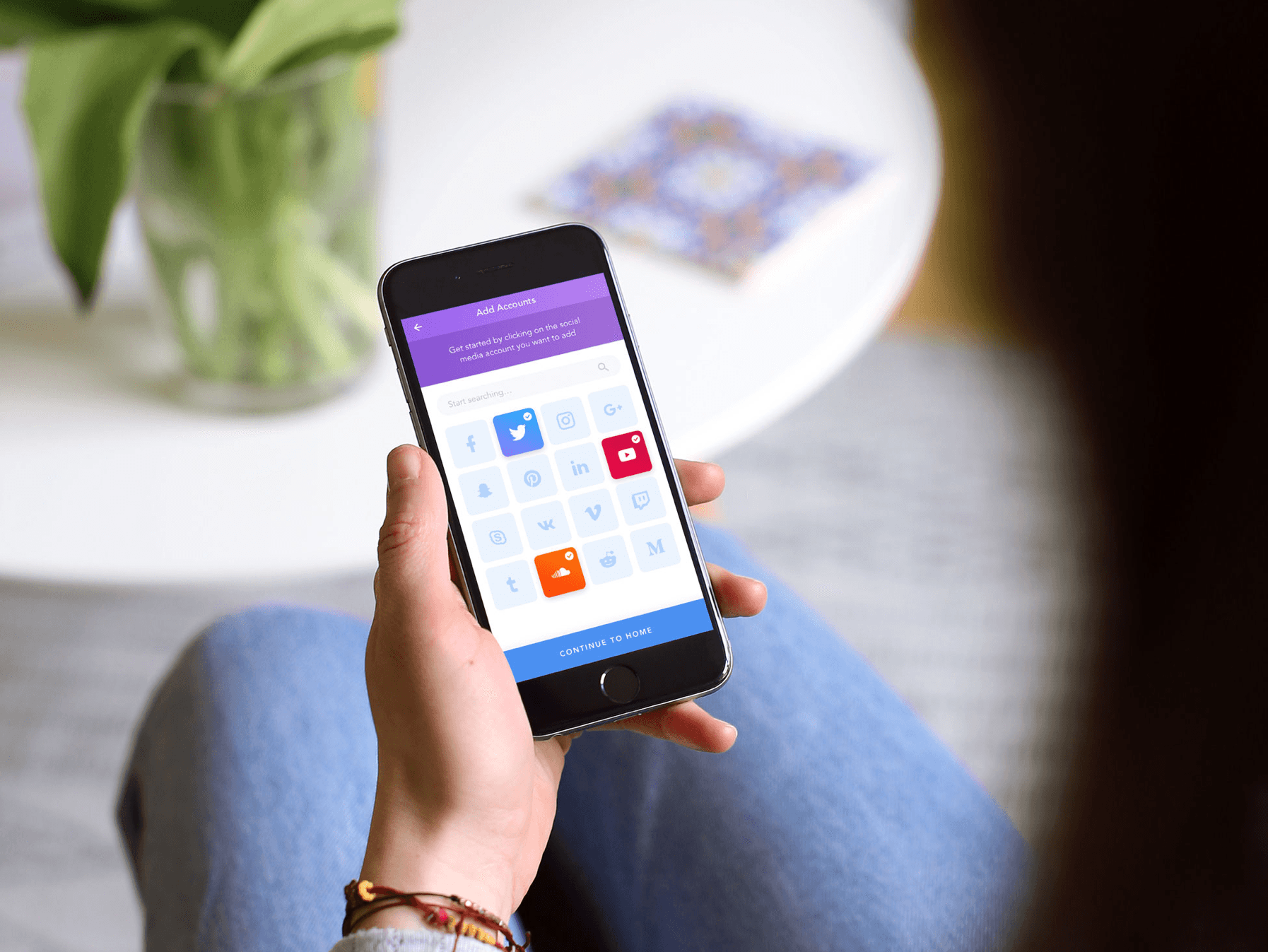 When wanting to make a connection, navigate to your personal QR code where you can either take a picture of your friend’s code or . Once you and your connection has dap’d, you can view their profile which records the location that you met, their connected social accounts, and number of connections. 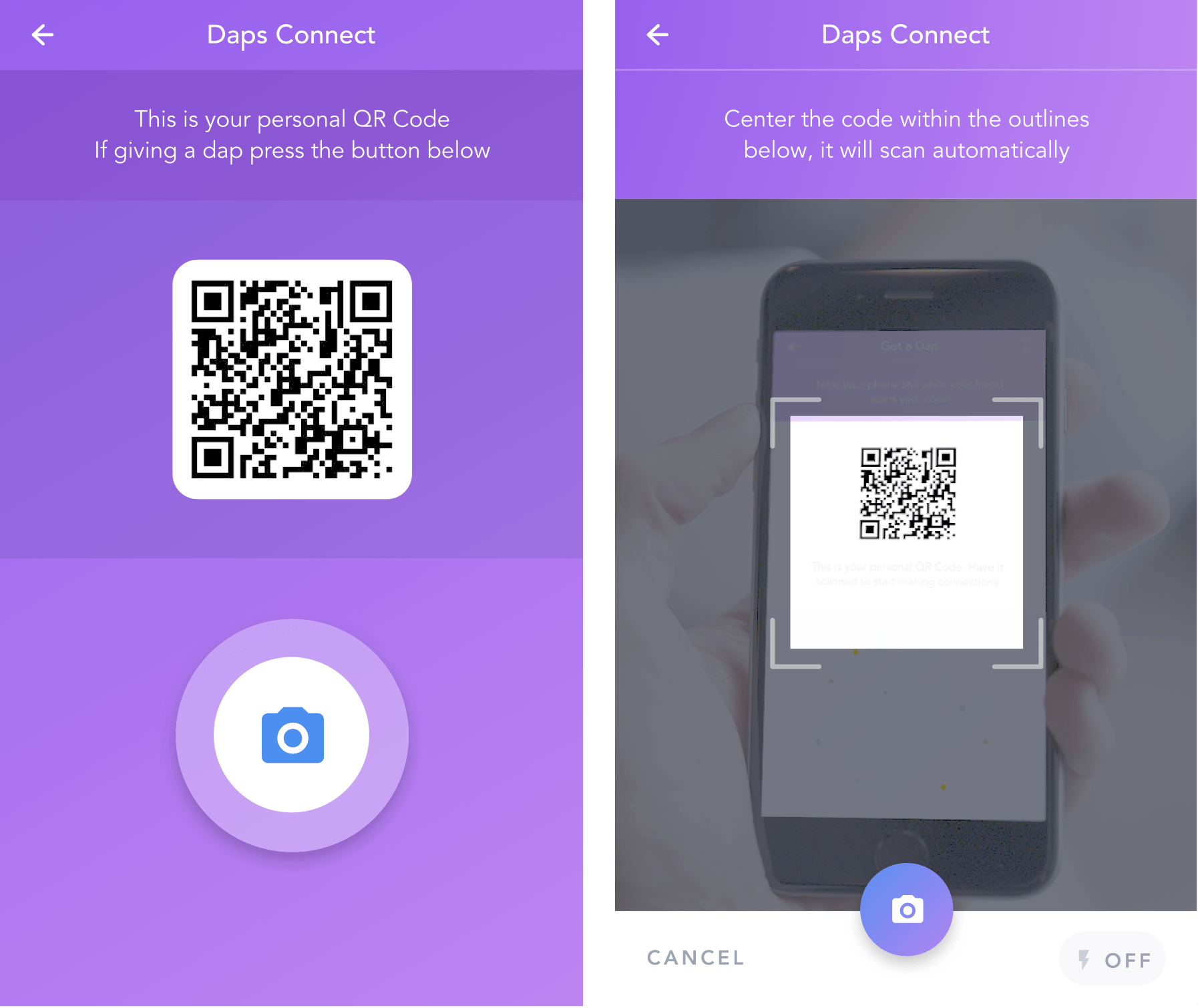 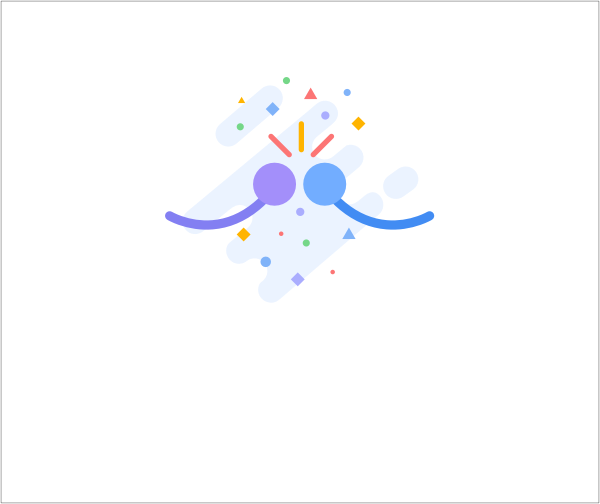 from the ground up

At the time, React Native was fairly new and underwent several substantial changes during our development process that required difficult upgrades. What was intended to save us time across iOS and Android, ultimately created more hurdles for us. Since then, React Native has substantially improved in stability, performance, and components for common required functionality. 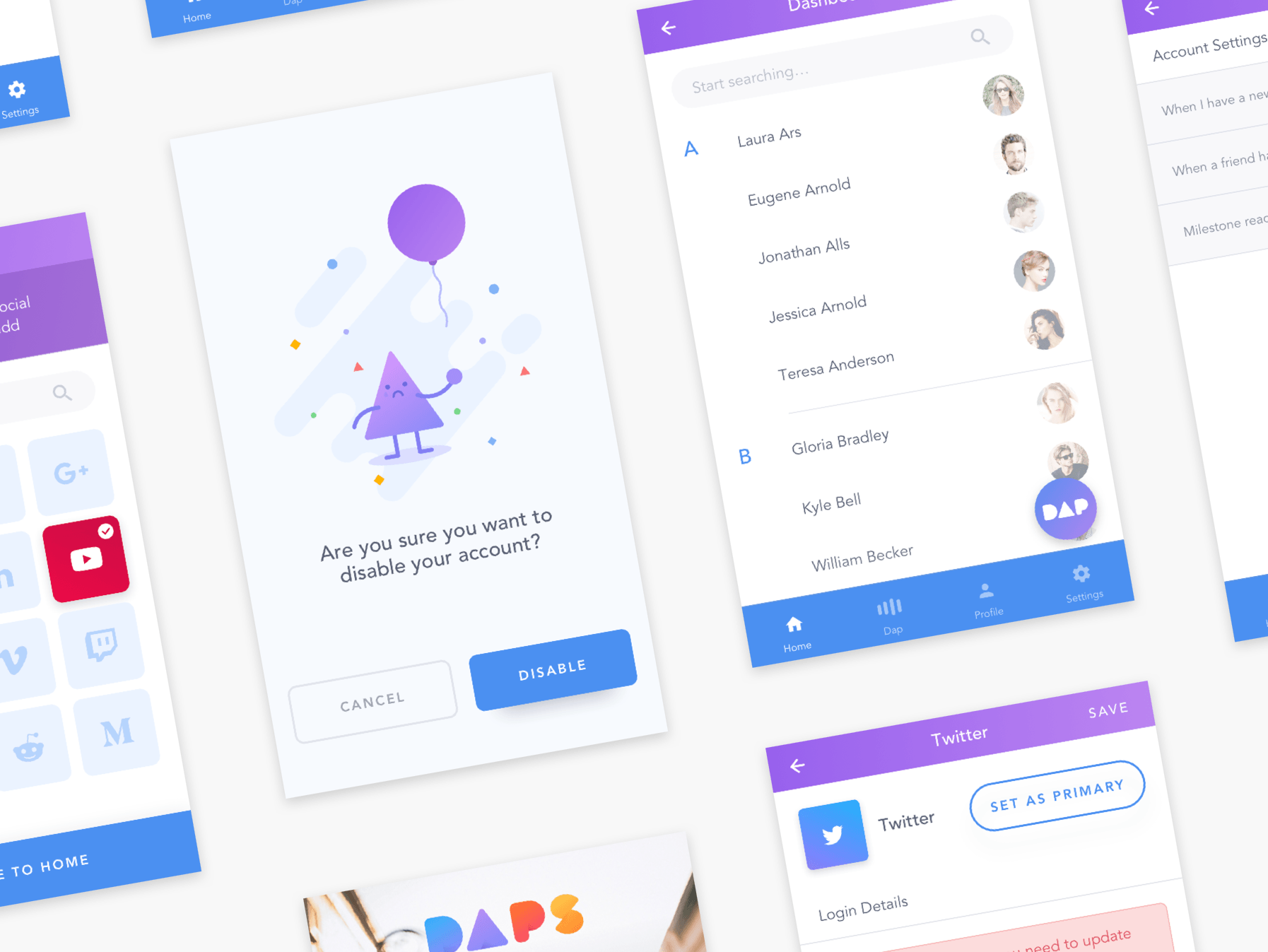 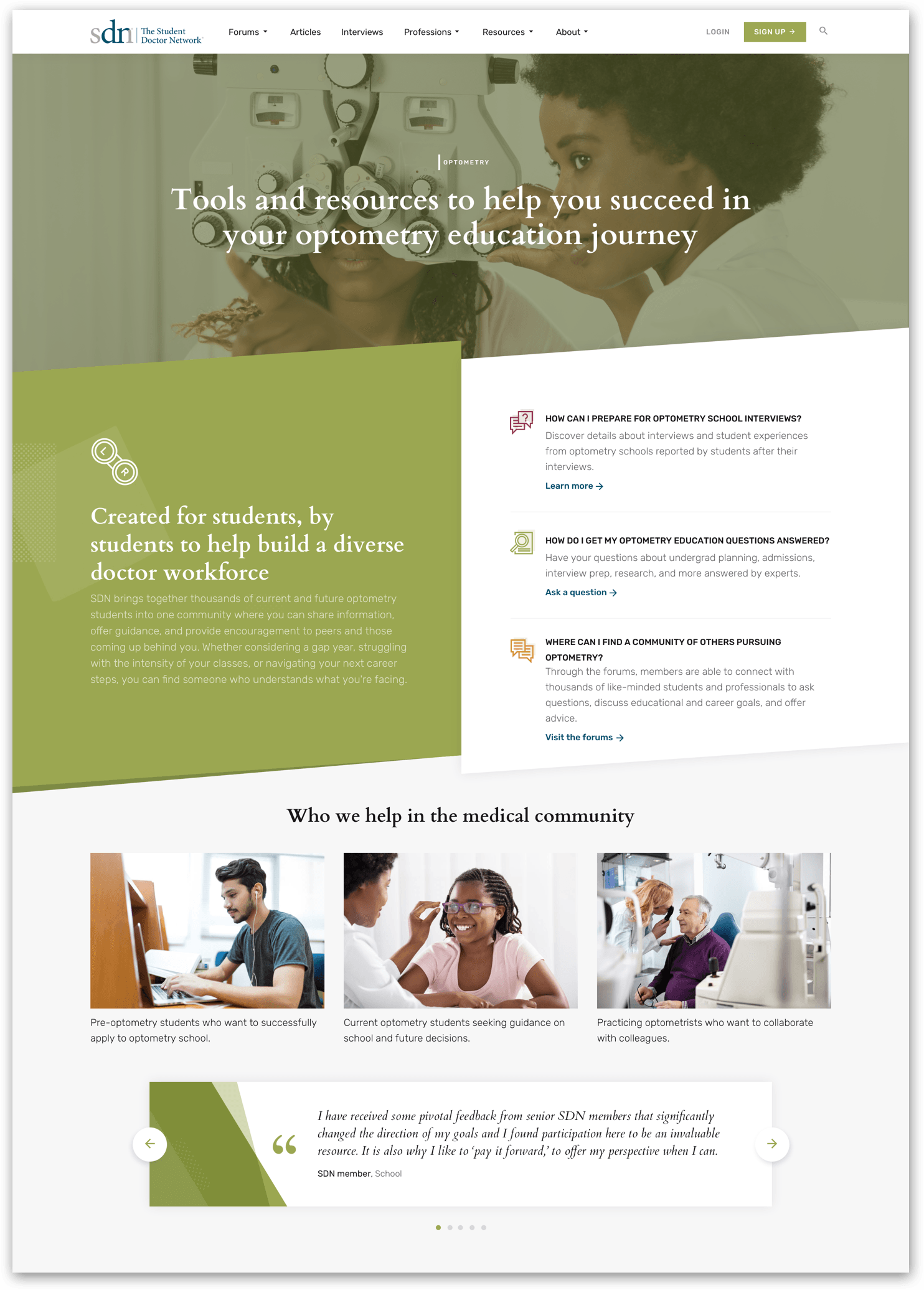 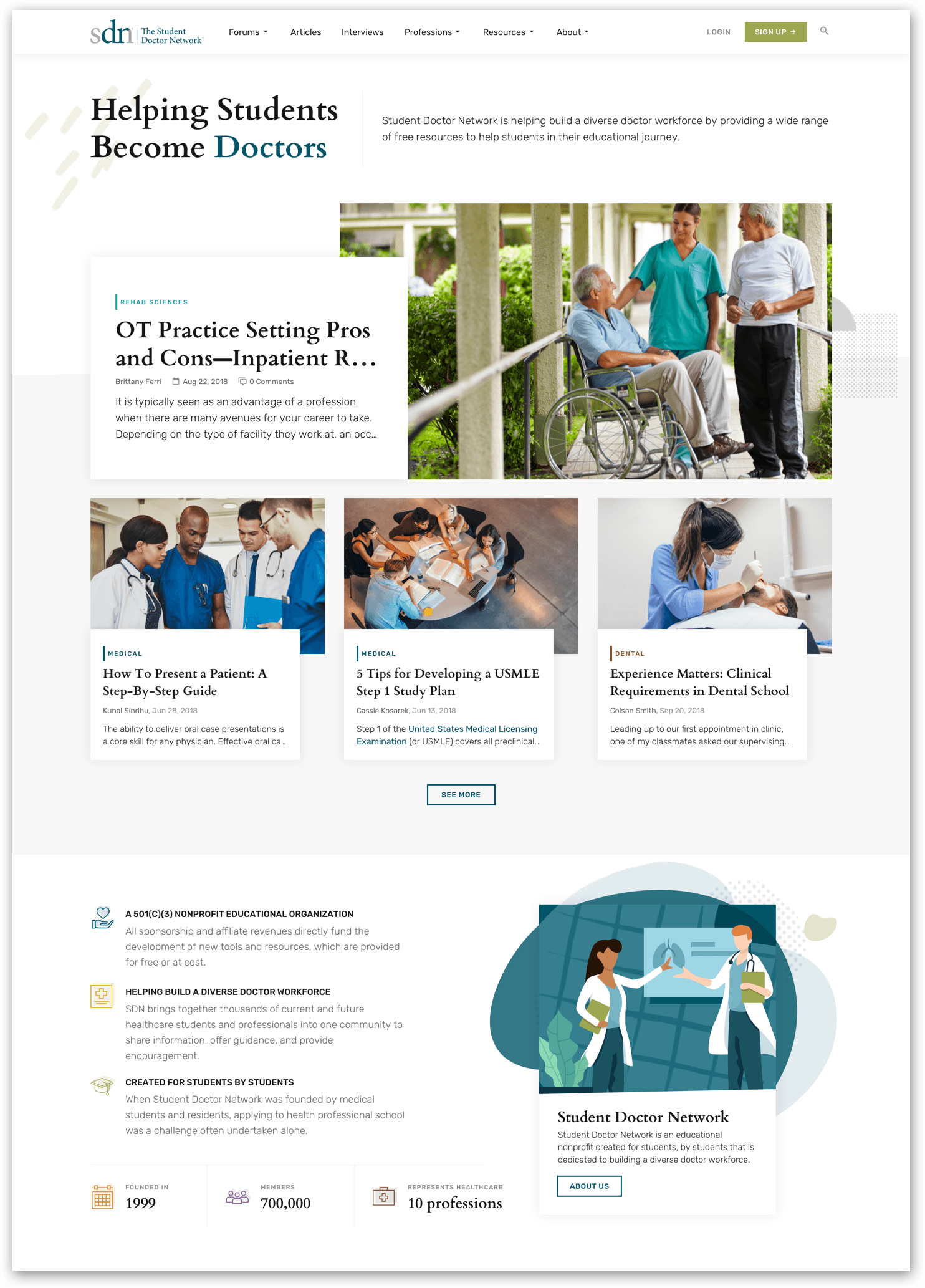 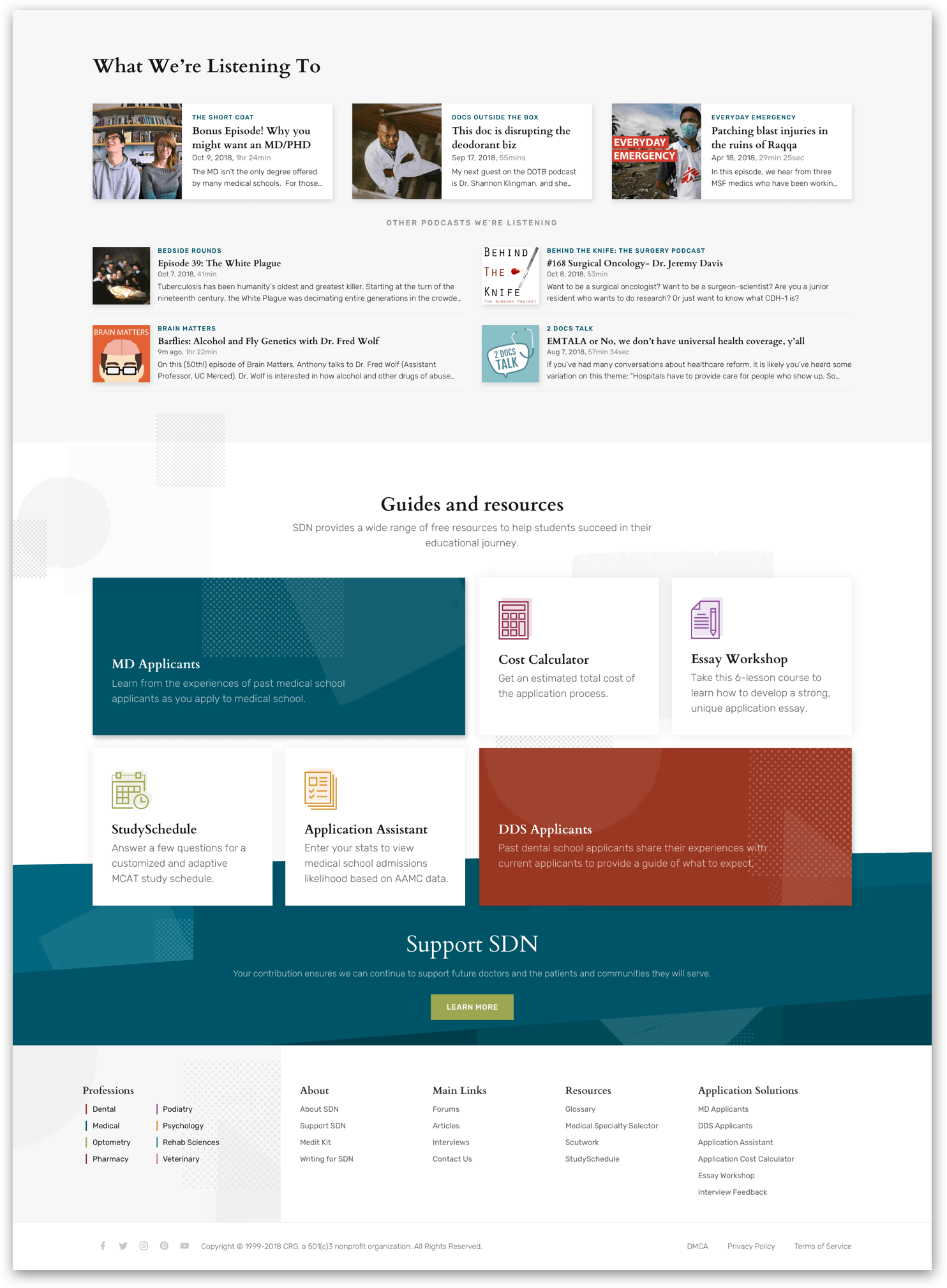 let's make something that matters.